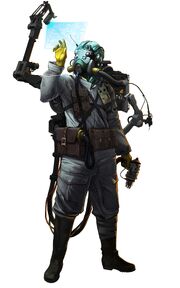 A group of scientists led by Riley found a way to withstand the lethal effects of Crossout with hermetically sealed suits. Now they travel through the Wasteland, studying anomalies and developing incredible mechanisms from the artifacts discovered there.

After the catastrophe, some people acquired genius invention skills. People of intellectual work were the first to notice that. For a while university campuses, closed cities and large labs turned into the branches of the world of the future. That is, until the very moment they began to resemble an amusement park in a lunatic asylum.

The virus was forcefully changing people. So called gadgeteers were getting crazy faster than anyone else, and ran away into the Wastes, leaving unfinished genius works. Some of those exploded, others were copied.

But not everyone got crazy or became a victim of their own experiments. A group of scientists under the leadership of Riley found a way to postpone madness and withstand the deadly effect of the Wastes. They gradually gathered more and more Survivors under their banners: talented scientists, engineers and other craftsmen, unable to protect themselves. Boundless curiosity made them put on protective outerwear and set forth as far as possible, where no one could stop their wild experiments. Some stayed at the border and traded with other factions.

During the next several years scientists had amassed a substantial number of artifacts, and learned to use some of them. Now they possess an amazing variety of machinery, both familiar military and revolutionary new.

Dawn Children is an intellectual elite of the Wastes. Their ultimate goal is unknown, but with every year they get stronger and continue to drive the Wastes for something… Or someone.

Little to nothing is known about Riley before the disaster, even his gender is not certain. Previously, he was the head of one of the laboratories of Waterquarn Corporation. He is the creator of protective overalls, counteracting the deadly effect of Crossout. However, the sealed suit won't let you see who is inside. There is a theory that the creature inside can no longer be called a human being. The chief expert of the Crossout has managed to keep a spotless and brilliant mind, as well as become a key figure in unification of Dawn Children. One can say that Riley is the world’s hope for revival, the harbinger of a new beginning, a gleam of progress amongst the decay and cruelty. But the true motives of this mysterious character are yet to be discovered.